Reserch on rat's how habit is form | cue-Routain-Reward


In the early 1990s the MIT researchers began wondering if the basal ganglia might be integral to habits as well. They noticed that animals with injured basal ganglia suddenly developed problems bering how to open food containers. They decded to experiment by employing new micro-technologies that allow them to observe, in minute detail, what was occurring  within the heads of ratesas they performed dozens of routaines. In surgery, eachrat had what looked like a small joystick and dozens of Tiny wires inserted into its skull. Afterward, the animal was placed into a T-shaped maze with chocolate at one end. 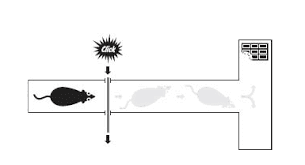 The maze was structured so that each rat was positioned behind a partition that opened when a loud click sounded.
Initially, when a rat heard the click and saw the partition disappear,it would usually wander up and down the center aisle, sniffing in corners and scratching at walls. It appeared to smell the chocolate, but couldn’t figure out how to find it.
When it reached the top of the T, it often turned to the right, away from the chocolate, and then wandered left, sometimes pausing for no obvious reason.
Eventually, most animals discovered reward.. But there was no discernible pattern in their meanderings. It seemed as if each rat was taking a leisurely, unthinking stroll.
The probes in the rats’ heads, however, told a different story.While each animal wandered through the maze, its brain – and in particular, its basal ganglia – worked furiously. Each time a rat sniffed the air or scratched a wall, its brain exploded with activity, as if analyzing each new scent, sight, and sound. The rat was processing information the entire time it meandered.
The scientists repeated their  experiment again, watching how route hundreds of times. A series of shifts slowly emerged. The rats stopped sniffing corners and making wrong turns. Instead, They zipped throught the maze  faster and faster. And within their brains, something unexpected occurred: As each rat learned ow to navigate the maze, its mantal activity decreased. As theroute became more and more automatic, each rat started thinking less and less.
It was as if the first few times a rat explored the maze, its brain, had to work at full power to make sense of all the new information. But after a few days of running the air anymore, and so the brain activity associated with scratching and smelling ceased. It didn’t need to choose which direction to turn, and so decision-making centers of the brain went quiet. All it had to do was recall the quickest path to the chocolate. Within a week, even the brain structures related to memory had quieted. The rat had internalizwd how to  sprint through the maze to such a degree that it hardly needed to think at all.
But that internalization-run straight, hang a left, eat the chocolate-relied upon the basal ganglia, the brain probes indicated. This tiny, ancient neurological structure seemed to take over as the rat ran faster and faster and its brain worked less and less. The basal ganglia was central to recalling patterns and acting on them the basal ganglia, in other words, stored habits even while the rest of the brain went to sleep.
To see this capacity in action, consider this graph, which shows activity within a rat’s skull as it encounters the maze for the first time. Initialy, the brain is working hard the entire time. 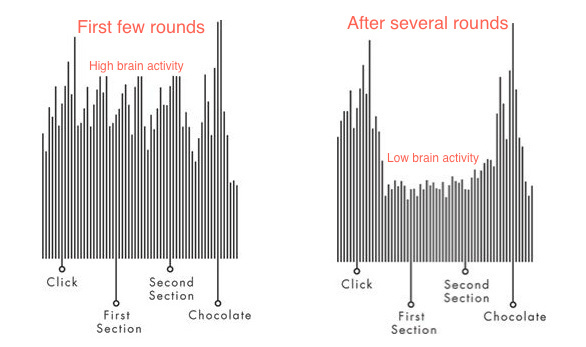 After a week, once the route is familiar and the scurrying has become a habit, the rat’s brain settles down as it runs through the maze: 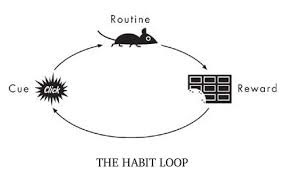 The process in which the brain converts a sequence of actions into an automatic routine is known as “chunking,” and it’s at the root of how habits form. There are dozens if not hundreds of behavioral chunks that we rely on every day. Some are simple: You automatically put toothpaste on your toothbrush before sticking it in your mouth. Some, as getting dressed or making the kids’ lunch, are a little more complex.

Popular posts from this blog 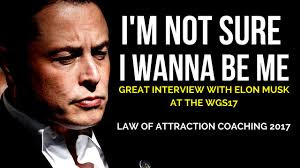 In this section, we are talking about three principles of a successful entrepreneur like Bill Gates, Mark Zuckerburg, Elon Musk and many others. This I told is from the book zero to one. About this book, we talk later. Now I told you about Three principal FIRST Every movement in business happens only once. From this line what we get is you have to be constant always no one knows when your idea will work. In this world internet, no one knows when your idea viral. You can also see that there are many people who become popular from there one thing. So it's clear that no one knows when your time will come, so work on your ideas SECOND Its easier to copy a model than to make something new. From this line, we clear that we do not want to copy any legend but you can do is you can see and learn from them you, they achieve that position that’s it. Then if like that idea you can apply in your life that’s you not have to do any hard work. You have to do is create yo
Read more